Mark Schneider re-enacts Napoleon during the biggest commemorative events of Napoleonic re-enactment since 2005. He will also be attending the 210th anniversary of the Battle of Znaim organized within the Project Austerlitz in Znojmo and Únanov, 10th-14th July 2019, and will also be participating in the 210th anniversary of the Battle of Wagram in Austria. We bring an interview with Mark, not only about his role of Napoleon in similar events (at Austerlitz, Jena, Borodino, Waterloo and many others) – Mark has also been serving in the US military and deployed in former Yugoslavia. His next visit to Europe is part of his “Journey of Liberty”, he will be leaving the US on 4th July, Independence Day, and the program in Znojmo will end on 14th July, the Bastille Day.

Yes, I will have the honor and pleasure to portray the Emperor Napoleon at both Wagram and Znaim this year. Since 2005, I have participated in nearly 100 events as Napoleon Bonaparte. I have been to numerous events in Austria, Belgium, Czech Republic, France, Germany, Italy, Russia, Spain and the United States. It has been quite an amazing adventure!

I think that Wagram overshadows Znaim for two reasons. First, it is Napoleon’s first major victory after his setback at Aspern-Essling in May of 1809 and second, the sheer size of the Battle with nearly 350,000 men fighting on both sides. I agree with you that Znaim should be spoken of with great importance because though Wagram was a victory, the bulk of the Austrian army was able to retreat and fight another day. The Battle of Znaim would end with the armistice and an end to the war. I think Znaim should certainly be thought of with greater importance and perhaps be remembered with other great victories such as Rivoli, Marengo, Austerlitz and Jena.

I did have the honor of being a soldier in the United States Army from 1993-1997. I trained to be a 19D Cavalry Scout. This was armored reconnaissance with a HMMWV and the M3 Bradley Cavalry Fighting Vehicle (CFV.) I did my initial training (OSUT-One station Unit Training,) at Fort Knox Kentucky with the 5th Squadron 15th Cavalry Regiment. I was then sent to Fort Polk in Louisiana and joined the 3rd Squadron 2nd Cavalry (2nd ACR.) We served as part of the 18thAirborne Corps and with JRTC (Joint Readiness Training Center.)  I was then assigned to the 1st Squadron 1st Cavalry (1-1 CAV) in Buedingen Germany. It was while I was in this unit that I was deployed to Bosnia-Herzegovina with the First Armored Division to enforce the Dayton Peace Agreement as part of IFOR (Implementation Force.) I was deployed there from December 1995 through October 1996. Following my deployment to Bosnia, I returned to Germany and finished my military service in April of 1997. 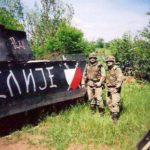 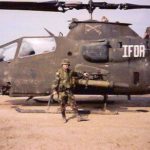 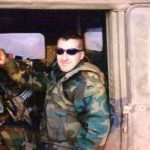 Absolutely! I firmly believe that all the answers to the future can be found in the past if you know your history. Technology in warfare has changed over the centuries but its principles have remained the same. By reading about the great Generals of the past like Alexander the Great, Hannibal, Julius Caesar, Frederick the Great and Napoleon, you are able to apply their principles of war, strategies and tactics to a modern battlefield. In every major military academy in the world, the military philosopher Clausewitz and his book On War is studied. Clausewitz fought in the Napoleonic Wars and based his writings upon the campaigns of Napoleon.

I think with any event, the quality of the participants will speak for themselves. That being said, I think it would be nice at each event to have several events planned that will make it more enjoyable for the participants as well as the public. First, it would be nice to have a narrator at an event/battle that will explain exactly what is happening on the field. The reasons why the soldiers are doing what they are doing.

This could be reinforced before and after the battle with a period bivouac set up and representatives from each unit explaining the life and times of that particular soldier (the uniform, weapons, equipment, etc…) Therefore, when the public sees the battle, they will now have a better understanding of what they are looking at and for the reenactor, it will allow him to share his knowledge on the subject. Other than the main battle, it would be nice to have smaller demonstrations performed by the units so that the public might receive a more focused look on the subject and potentially a “hands on” opportunity in which the public might be able to hold, touch or wear the equipment. I believe that it makes a big difference to the public when they can feel the equipment up close as opposed to seeing it far away.

Another opportunity would be to include a character or characters giving theatrical performances in First Person as if you were really meeting someone from that time period. It might be nice also to include cooking demonstrations, laundry, camp life, dancing, etc… I believe that this would all add to the experience. Before the event at Znaim in July, I will be giving a talk on this subject called “Ideas for Improving Napoleonic Reenactments.” Many of these ideas come from my over 20 years of reenacting experiences as well as from the work I do at the Colonial Williamsburg Foundation. There certainly is a link with Napoleonic Reenactment and The American War for Independence. Some of Napoleon’s soldiers served with the French army under General Rochambeau. Most notably Marshal Berthier who would go on to become a Marshal of France and Napoleon’s Chief of Staff. During the war he was a Captain and aide-de-camp to Rochambeau and made maps of the cities the French stayed at. I do portray General Lafayette for Colonial Williamsburg and with the various performances I do, I often talk of Napoleon and the Napoleonic wars when I set the presentation at a later time in history. It is interesting to note, that Napoleon and Lafayette did not get along terribly well, so I am in conflict with myself! Lol!

Well I will of course attend Wagram and Znaim in July. I am planning a trip to Paris in the fall to take part in the 30th anniversary of the XeEscadron. That is a European reenactment organization that I am a member of. I also hope to attend Austerlitz 2019. For next year I have not fully planned what events I shall attend, but I am planning a work trip to Paris with a colleague of mine who portrays Thomas Jefferson. As long as there is a Napoleonic event where I can experience the rich history and portray the great man Napoleon, I am happy to go anywhere!